Another year of Dungeness Crab Season waits to begin while northern Oregon and Washington still wait for approval. In accordance with preseason test results along with consultation with the ODA along with California and Washington fishery managers, Dungeness crab season has been delayed in these areas until at least December 31st 2020.

Normally targeted to open on December 1st each year, since 2015  all Dungeness Crab Seasons have been slightly delayed primarily due to the meat quality test results not meeting standards until later than usual. Testing has allowed southern Oregon to begin with Washington not far behind.

In 2019, there was a ban on vessels taking or landing crab in an area closed for the meat quality delay. Any vessel violating this rule was not permitted to participate in fishing 30 days after the December 30th start. Vessels that were permitted in the December 15th opener south of the Sonoma-Mendocino county line are not able to set gear in Mendocino, Humboldt, and Del Norte counties until after 12:01 am on Thursday, January 30, 2020. This rule also applied to various delayed areas in Washington and Oregon.

This detailed PDF from the California.gov shows safe practices for minimizing whale harm in traps.

This video has a great bit on the liability changes for crabbers' gear harming whales with marked fishing gear:

The RAVENOX CRAB POT ESCAPE CORD KIT was specially designed after consulting with the Washington State University Beach Watchers and the Washington State Fish and Wildlife Department. The kit not only includes the legal, 100% biodegradable cotton, 120-thread count 1/8-inch cord, but also includes bungee cord and bungee cord hooks to allow for lost traps to pop open after the cord degrades in seawater. These components allow for unique, independent applications that can be configured specifically to the shrimp pot or crab trap to allow for the successful escape of crabs and shrimp. 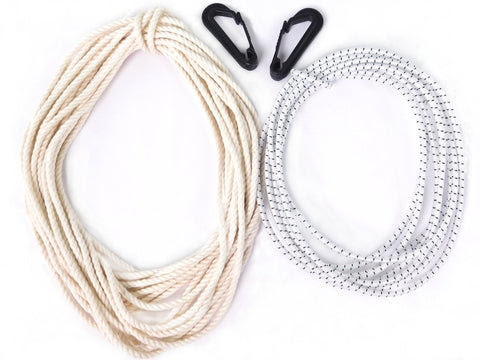 Here is a great video to exhibit how to modify your crab pot:

One great thing to remember when crab fishing is going at the time of day near low or high tide to maximize your catch. Another item to keep in mind is having clearly marked gear. A license is required for any person over 12 to participate in crabbing. For a more comprehensive look at best practices when it comes to crab fishing, check out the Oregon Department of Fish and Wildlife's BEST PRACTICES LIST.

Have a safe and plentiful crab season!